The recording of  Wednesday’s Bible study with Dr Oswalt has been posted on the “Teaching” page.

Here is the message I mentioned during adult ed today.

On Learning a Lesson Too Well

We have a new page titled “Teaching” located on the black menu bar.  Audio recordings of Dr. John Oswalt’s Wednesday evening series on 1 John are available there.

This is an excellent post from our friend Dr Lawson Stone. Here’s a sample:

Too easily, non-liturgical churches in their desperation to be relevant to the “here and now” lose the power of the particular “there and then.” They move too quickly to the generic, “living Christ” without giving due regard to the Fact of the risen Jesus. The classical Easter liturgy calls our attention to this fact. He arose.  The Easter liturgy makes us listen to the whole story of the Passion, often read aloud in the service. It calls us to sing songs not of Christ’s ongoing life, but of Jesus who arose “up from the grave.”

A recording of the first part of Dr. Oswalt’s Bible Study on 1 John is posted on the “Teaching” page.   You can listen to it live-streaming or download it from there.

Thanks, Bob for capturing this great day for us! 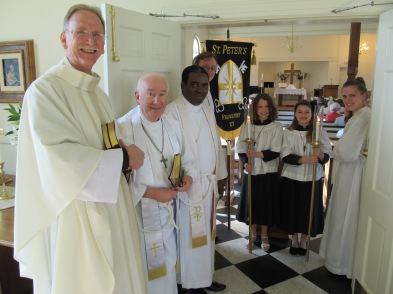 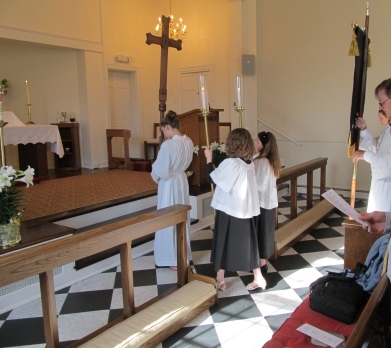 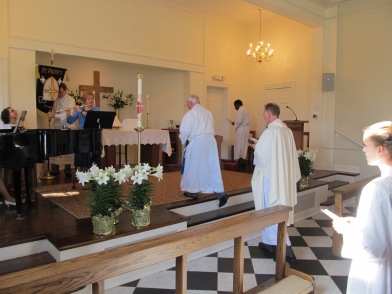 This post was written by one of my favorite authors and speakers, Christopher West.  I heard him speak at the 2014 ACNA Assembly.  He is an amazing young Roman Catholic layman with a great message and ministry.

I would encourage you to consider following his daily blog at http://corproject.com/

That’s the journey of the Christian life. It’s the journey of realizing that all we are before God is a gaping, bleeding need for his mercy. And there are no exceptions. That’s what our humanity is. Even Mary, conceived without sin, is a nothing in her humanity but a need for God’s mercy – a need that, in her case, was met right at the moment of her conception and sustained her throughout her life, but nonetheless a need!

We get the impression growing up, don’t we, that “saints” are somehow those who are no longer “sinners”? That’s the dichotomy; that’s the way we talk – saints and sinners are two groups of entirely different kinds of people (as if saints weren’t also sinners).

Growing up with this false dichotomy in my head, I thought I needed to hide my sin to be “acceptable,” to be “lovable.” For years I hid my inner misery from myself, from others, from God, because I thought it was repulsive; I thought it made me “unlovable.” To those who aren’t full of mercy, it is repulsive. But guess what mercy means? The Latin (as you’ve read in my blog previously) is misericordia and it means “having a heart for the misery of others.” Our misery actually entices God. It attracts his heart to us.

Hiding my misery from God and others, I came to believe I had some sort of “strength” to offer my wife, my kids, the Church, and the world. The Lord in his mercy (and my wife in hers) has been helping me see that all I really have to offer is my weakness. To this end, I have found St. Therese of Lisieux’s teaching of great benefit. Pope Pius XII summed up her insights well when he wrote: “We must take St. Therese at her word when she invites the most unregenerate as well as the most perfect to count nothing of value before God, save the radical weakness and spiritual poverty of a sinful creature.”

Speaking from experience, it seems only through various (painful) trials, in which our misery becomes undeniable, do we come to accept that God’s grace is sufficient for us, that his power is made perfect in our weakness (see 1 Cor 12:9), and that he is “rich in mercy” (Eph 2:4). And if he is rich in mercy, then we should have no fear taking an honest look at our gaping, bleeding need for it.

This Wednesday, April 8th, we will begin a 4-week study with Dr. John Oswalt from Asbury Seminary (bio).

Come at 6:00 PM for a light snack supper — sandwiches, fresh veggies, fruit etc.  (Feel free to bring something to share, if you like, but the basics will be provided).  The study will start at 6:30.

We will be looking at the Letter of 1st John. Dr Oswalt will be following his very practical little book, On Being A Christian.  Copies will be available for purchase.

“Just as a three-legged stool sits securely on the ground regardless of how rough the surface is, there are three essential evidences of the Christian life – love, obedience, and belief. When all three are present we have a truly stable and fruitful life.”

At the heart of our response to the challenges of today must be faithful and costly witness to the gospel, by people who are deeply convinced that their work will not be useless or wasted because it is done for Christ and in the hope of the resurrection. Archbishop Eliud Wabukala, Kenya, Chairman of Global Fellowship of Confessing Anglicans

Recommended further reading: What’s Love Got to Do with It? The Politics of the Cross, by Stanley Hauerwas. Immediately following the Eucharist on Maundy Thursday we remove from the altar all the vessels, the missal and stand, the candlesticks, the paraments, eveything.  The table is bare, plain, naked.  We shroud the crosses with black.  The lights go down. We leave the church in uneasy silence, forbidden the usual words of greeting, encouragement, appreciation for the sermon, the music, the small-talk that makes us feel at home.   It right for this to feel wrong, this disruption in what we have grown used to.

These symbols point us to the reality of Christ’s suffering and death.  Like all symbols they have multiple layers of meaning.  The altar table represents Christ.  Its stripping calls to mind his treatment at the hands of the Temple guards and the Roman soldiers.  He was stripped for beating, for mockery, finally for crucifixion, death and burial. But Jesus also stripped himself when he laid aside his outer garment and, in the minimal apparel of a slave at a dirty task, no longer the host but the servant, washed the feet of his disciples. In fact Christ’s whole life was a stripping, from the moment of the Incarnation, laying aside all the prerogatives of His eternal Sonship in the Blessed Trinity.

Though he was in the form of God, did not count equality with God a thing to be grasped, 7 but emptied himself, taking the form of a servant, being born in the likeness of men. 8 And being found in human form he humbled himself and became obedient unto death, even death on a cross (Phil 2: 6-8)

St Paul begins this passage by saying, “Let this mind be in you,” a willingness to strip ourselves, and be stripped.  Terrifying thought.  In chapter 3 Paul takes it a step further declaring his one objective: that I may know him and the power of his resurrection, and may share his sufferings, becoming like him in his death. I recommend this brief meditation for further reflection during this season. May the Savior’s presence be very real to you in these hours.